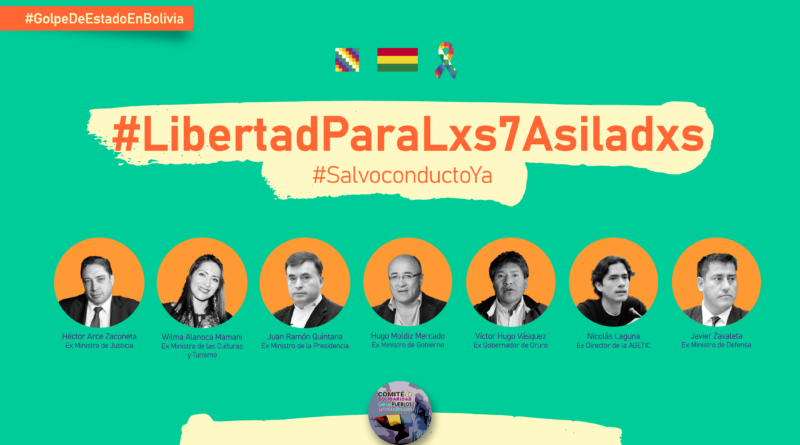 LAUNCHING OF THE INTERNATIONAL CAMPAIGN

The Committee of Solidarity with Latin American Peoples and the Human Rights Working Table of Córdoba Argentina together with ALBA-Switzerland, Consejo Pro Bolivia Francia, Argentinian Citizens Association in France (ACAF), Wiphala Collective y Bolivia Solidarity Campaign-UK, announce the launch of an INTERNATIONAL CAMPAIGN FOR FREEDOM AND SAFE PASSAGE FOR THE 7 REFUGEES IN THE EMBASSY OF MEXICO IN BOLIVIA.

It has been seven months since seven former officials in the constitutional government of Evo Morales remain isolated in the residence of the Embassy of Mexico, in La Paz, without the ruling dictatorship providing them the safe-passage for them to travel to Mexico.

They asked for political asylum to safeguard their lives, since they were threatened with death, their families were severely persecuted, harassed and threatened. In most cases, their homes were raided, looted, destroyed or burned.

On repeated occasions and publicly, the coup government Minister Arturo Murillo has said that the former authorities of the constitutional government of Evo Morales would be “hunted” and imprisoned before any arrest warrant was issued – at the time of entry to the embassy NO ONE resident had any open process against them or any order for their arrest. With the passage of time, a series of judicial processes -of delusional and implausible content- were produced outside of all political, legal and human rationality.

Both Bolivia and Mexico are signatures of the American Convention on Human Rights, which in article 22 establishes the right to seek and receive asylum: “Everyone has the right to seek and receive asylum in foreign territory in the event of persecution for political or common crimes connected with politicians and in accordance with the legislation of each State and international conventions. ” In addition, the historical antecedents regarding the right to asylum in Bolivia and in the region have shaped in customary terms «the Latin American tradition of asylum», a tradition that even bloody dictatorships have maintained in other moments.

The de facto authorities of the Bolivian State of «No Rule of Law» – according to Dr. Eugenio Raúl Zaffaroni – have not followed the observations made by the Inter-American Commission on Human Rights (IACHR), after its visit to Bolivia on December 10, 2019 , in which it orders «to deliver the safe-conduct to the people who are isolated in the embassies of Mexico and Argentina, or in other diplomatic headquarters, so that they can thus exercise their human right to obtain asylum and refuge, in such a way that does not break up their family nuclei ”.

We denounce this very serious violation of human rights to the world and demand the immediate delivery of safe-passage for these seven people. So that they can leave the country, reunite with their families and loved ones, live with dignity, in freedom and in the effective exercise of human rights.

We look forward to seeing you at the Press Conference to Launch the International Campaign for Freedom and Safe Passage for the 7 refugees at the Embassy of Mexico in Bolivia next Wednesday, June 17 at 3:30 p.m. Argentina time (2.30 p.m. Bolivia; 20:30 CET) ) in which Eugenio Zaffaroni, Atilio Borón, Isabel Rauber, Patricia Moldiz, Gustavo Tissera and Lyllan Luque will participate.