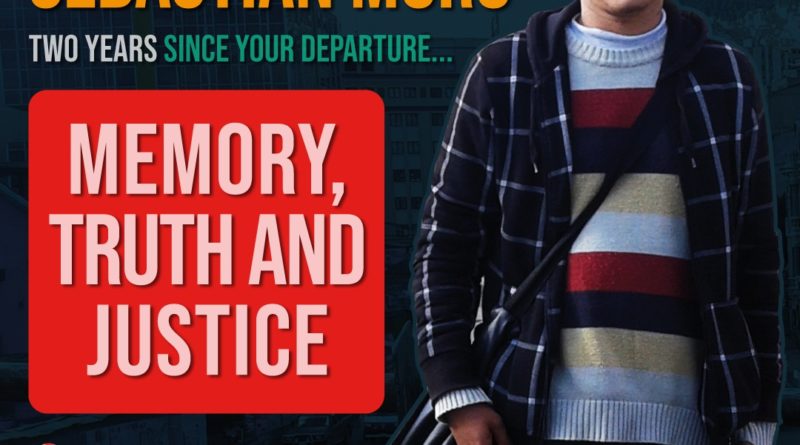 This document is part of the #JusticiaPorSebaMoro campaign, which his family started with the slogan #SebastiánMoroFueElGolpe just after the perpetration of what all indicates was a political assassination in the context of the November 2019 coup in Bolivia, the account of which was included in numerous reports and court presentations. Today, the demand for justice for the Mendoza journalist is joined by human rights, political and social organizations from Latin America and the world. These groups accompany the effort for Memory, Truth and Justice so that it can be translated into trial and punishment of those responsible for at least thirty-seven homicides, torture and kidnappings, among other crimes against humanity committed during the recent coup in Bolivia. Sebastián is one of those victims because his work as a journalist expressed a political commitment that this developing dictatorship wanted to silence and punish. Born in Mendoza on May 14, 1979, Sebastián Moro is a thorough and tragic example that in Latin America, journalism committed to human rights and social struggles is still valid and indispensable for the people, censored and persecuted by power.

Sebastián worked for Radio Nacional in his province, wrote about human rights from a integral perspective and covered the trials for crimes against humanity for the group Juicios Mendoza. That was what the thesis with which he obtained the Bachelor of Social Communication diploma, one he did not manage to receive in life, was about. With the inauguration of the Government of Cambiemos in 2015, he was one of the thousands of journalists who for economic or political reasons lost their job in Argentina.

Attracted by the process of change led by Evo Morales and Álvaro García Linera, in February 2018 he moved to Bolivia. There he worked in the media of the Trade Union Confederation of Peasant Workers (Confederación Sindical Única de Trabajadores Campesinos – CSUTCB), as chief editor of the newspaper Prensa Rural and host of a program on Radio Comunidad. As a correspondent for the newspaper Página 12, Sebastián wrote a dozen articles on the process that came after the October 20 elections, one that led to the coup. In those days, he was interviewed by the Argentine media and from several South American countries and his was a first warning voice about the unfolding anti-democratic sedition.

For example, in an interview with TV channel Canal 9 Litoral, on November 7, Sebastián reported on the “continuous confrontations and paralysis of the country, because the groups that respond to the different sectors of the opposition are carrying out measures of force” and denounced the “modus operandi of these radicalized shock groups that respond to civic committees, fundamentally the Union Juvenil Cruceña, the most fundamentalist. Patricia Arce (the mayor of Vinto) was kidnapped and then the Mayor’s Office building was set on fire and destroyed. They took her to an isolated place and subjected her to various humiliations (…), an emerging image of the discourse and actions of violence and racism that were believed to be buried in Bolivia and that in the light of these confrontations have re-emerged ”.

“Sebastián was the first journalist in the world to announce and denounce the coup d’état and in turn was his first fatal victim,” say his mother Raquel Rocchietti and his sisters Melody and Penelope. On Saturday, November 9, on the eve of the coup that would take Jeanine Áñez to power, Sebastián told them via WhatsApp that the coup gangs had taken over the streets of La Paz and the headquarters of the CSUTCB. He also told them how they arrested, tied up and tortured José Aramayo, his direct boss and general director of the Confederation’s media, for several hours, just barely being saved from a lynching. Sebastián returned to his apartment, where he finished a note for Página 12 and told them that he would go out “to relax for a while”, because he knew that the next day he would have a lot of work.

On Sunday, after several hours of trying in vain to communicate with Sebastián, the Moro family asked a close friend to go and look for him. This person – today a witness with a protected identity – found him in his bed, semi-unconscious and with signs of punches, and saw some chairs thrown on the floor. Sebastián was admitted to a private clinic, where he fell into a coma. Penelope arrived in La Paz on Monday the 11th, when Evo Morales had already resigned and the opponents looted his residence. At the clinic they informed her that her brother had suffered a life-threatening stroke. She photographed the marks on his body, which the doctors attributed to an assault.

Raquel and Melody arrived in Bolivia on the 13th. Sebastián’s condition worsened and at midnight on Saturday the 16th he died. During the seven days his agony lasted, he did not regain consciousness. Two days earlier, the Executive Power headed by Áñez had issued Decree 4078 that exempted police and military personnel who had participated in “operations to restore internal order” from criminal responsibility. It was denounced as a “license to kill” by protesters opposed to the de facto Government. In the following days, the dead would be counted by the dozens and the wounded by the hundreds.

In this context, the doctors at the clinic discouraged the Moro family from claiming Sebastián’s autopsy, while Argentine consular officials were offering them as the only options: cremation and “leave the country as soon as possible”, or bury him in a common grave in a local cemetery. Argentine diplomatic authorities denied the possibility that plane could repatriate the body. Unable to make a complaint and fearing for their own integrity, Raquel, Penelope and Melody were forced to accept cremation and return to Argentina with Sebastian’s ashes and without an autopsy.

On Thursday 14 at 8:32 p.m., the then Argentine Security Minister Patricia Bullrich had published on her Twitter account @PatoBullrich: «We rescued and saved the threatened Argentine journalists in #Bolivia, Thank you @gendarmeria for the permanent commitment» . Minutes earlier, when announcing it on the Todo Noticias channel, she declared: “We were able to remove them quickly without there being any type of violence against them. Work guarantees on the streets are not given… We are at the disposal of any other chronicler who is in the place”. That provision did not include Sebastián, nor did it include Argentine photojournalist Facundo Molares Schonfeld, detained while he was admitted to a hospital in Santa Cruz de la Sierra in serious condition and imprisoned until November 28, 2020, after the recovery of democracy in Bolivia.

As soon as they were able to return to Argentina with Sebastián’s ashes, his mother and sisters began an arduous fight for truth and justice, which began with the complaint to the Inter-American Commission on Human Rights (IACHR). In its 2019 Annual Report of the IACHR’s Office of the Special Rapporteur on Freedom of Expression, chapter “A. Freedom of expression in the context of the post-electoral political crisis in Bolivia ”states:“ Among the main violations of the exercise of freedom of expression and the right to access public information registered, there is the possible murder of journalist Sebastián Moro ”, among another 70 attacks on journalists surveyed in this context. Furthermore, the “extremely questionable” death of the Mendoza journalist was included in the report of the Argentine Commission in Solidarity with the Bolivian People, where numerous indicators mention that “he suffered an attack prior to the long agony that ended a week later with his death”

Likewise, the Moro family presented complaints in the Argentine Federal Justice so that Sebastián’s case is included as a possible crime against humanity in the cases against the coup sedition in Bolivia that, based on the universal jurisdiction for the investigation and criminal prosecution of Human rights violations, are being processed in the courts of Buenos Aires, Córdoba and Mendoza.

At the same time, the solidarity of numerous human rights groups, unions of press workers, social and political leaders, and journalists committed to instate the claim over investigation and justice for Sebastián Moro joined the cause. Today, the life of the Moro family is an incessant journey through institutional settings, spaces of political activism and the media. Today, Raquel, Melody and Penelope are the engine of a claim that grows and will not cease until truth and justice are achieved for Sebastián Moro.

On November 8, 2020, the Bolivian people reconquered democracy one year after the coup d’état was perpetrated. With the inauguration of Luis Arce Catacora and David Choquehuanca as president and vice president of the plurinational State of Bolivia, legality was recovered and the opportunity to present the Sebastián Moro case before the institutional justice of the country where he died was enabled.

In this context, the Final Report of the Interdisciplinary Group of Independent Experts (GIEI) that investigated in Bolivia «the acts of violence and violation of human rights that occurred between September 1 and December 31, 2019,» together with the massacres de Sacaba (November 14 and 15, 2019, 27 dead) and Senkata (November 19, at least 10 dead) and other acts of violence attributed to the coup gangs, included the death of the Argentine journalist.

On September 3, 2021, during the public presentation of the GIEI Report, President Arce himself named Sebastián Moro among the thirty-seven victims of the violence of the right-wing coup, for whom he promised justice and reparation. «Today we honor the memory of all the fatalities during this disastrous period and, although the culprits never did, on behalf of the State we ask for their forgiveness and we accompany the pain of their families,» said the Bolivian head of state.

Last July, an investigation carried out by the current Argentine ambassador Ariel Basteiro revealed that the government of former president Mauricio Macri was not only reluctant to define the sedition of November 10, 2019 as a coup, but also supported it with the shipment of war material. The one who received the letter in which Bolivian General Jorge Terceros thanks the contribution of ammunition and supplies was the former ambassador Normando Álvarez García, the same one who, while Sebastián was dying in a private clinic in La Paz, did not fulfill his promise to help at least with medicines and left him to his own devices. A similar idleness was shown by consular officials.

Honoring his memory, reaching for the truth and doing justice is today a claim of society and a pending issue for the democratic states of both nations. It is imperative that current officials translate human rights commitments into concrete actions.

Sebastián Moro was born in Argentina during the civil-military dictatorship headed by General Jorge Rafael Videla.

Sebastián Moro dedicated his work and his life to the fight for human rights, democracy with equality, memory, truth and justice.

It is time for justice for Sebastián Moro.